She Got the Hole in One 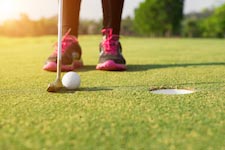 The following post was written by Cait Tully, a college student at James Madison University who wanted to share her golf story with us.  There are a lot to perceptions we have yet to change about a woman’s place on the golf course.

My childhood and golf are two words that I could use synonymously. I began playing the game because my dad had an immense love for the sport and wanted me to carry on that same passion. I hated him for it in the beginning because golf is frustrating to learn; it takes thousands of hours of practice to get your mechanics and technique right. Slowly, I started to grow the same love my dad felt for the sport. However, I quickly realized that no amount of time or money invested in becoming a better player could change the one thing that made me feel out of place- I am a girl.

Winter of 2008 was the first time I picked up a golf club and by the Summer of 2009 my father had entered me into my first competition. At the end of the season in early August, I achieved something that golfers play their whole lives hoping to do. I got a hole-in-one, at seven years old. I remember very little about that day. But, there’s one detail I will never forget: at the end of the round, I walked into the tent to check scores with my opponents and signed off on each other’s scorecards. Suddenly, I heard a shout, “There was a hole-in-one!”. I see all the competitors and parents turn their heads looking at the group of boys who had also just finished their round. No one was looking and questioning the group of girls gathered by the tent. All eyes were on the group of boys who were walking off the final green. I even heard someone shout “which one is he”. One of the best feelings I have experienced till this day is watching the expressions on everyone’s face as they realize it was me who had scored the hole-in-one: the four-foot-tall, seven-year-old girl, dressed head to toe in pink, with a big grin on her face.

I saw these systems of advantage, even more, this past summer while I was working on the beverage cart. After a couple of weeks, I began to make relationships with some of the regulars, mostly retired men who had the time to play on the weekends. Often, these men would lecture me on golf and try to teach me the mechanics of a “good swing”. Even when I told them I understood what they were saying, they responded with micro-aggressive statements. Without being able to prove myself, my word felt weak, and their response felt fair at the moment. When this happened on the course outside of my job, I could gain respect by swinging my club, but I had to exchange my clubs for beers, and I felt powerless.

Golf has taught me the most valuable life lessons. I credit golf for sculpting me into the person I am today. Golf taught me patience- it is without a doubt that golf requires a ton of it. Golf taught me to manage my stress and to perform well under pressure. It is the type of game where you can have seventeen great holes and one bad hole, and your score will be reflective of that one bad hole. But going through these experiences helped me in school, helped me in relationships, and helped me in the workplace. During all these high-stress times like taking exams, giving advice to friends, or during rush hour at work, I knew how to keep a level head.